There are many reasons why people wish to travel with their pets. Below we've made an attempt to analyze pet travel policies of major European, North American and Asian carriers in order to find the best airlines for traveling with pets.

Please, do not blindly rely on the information found below. Airlines can change their policies, we can make a mistake, so please always visit the relevant web pages of the airline in question in order to obtain up-to-date firsthand information.

There are three points that need to be taken into account if you're going to fly accompanied by your pet:

And now to the main question. What airlines are best for traveling with pets? There's no straight answer to this question, but taking into consideration a number of key factors we can still get some idea. 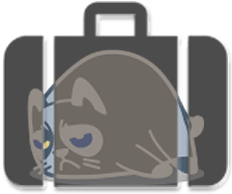 The majority of European and American airlines will agree to transport our pets in the passenger cabin or in the baggage compartment / cargo area of an aircraft. Quite in contrast to the Asian airlines (looking at them you might think that the best fitted for flying with pets airlines are the ones that take them on board at all). If you wish to transport your pet in the cabin of an aircraft operated by an Asian company, your choice is very limited (you can see it in the comparison table Pets' transportation by Asian airlines).

What are the costs of flying with pets?

Most airlines will allow traveling of service animals in the cabin without any additional charges. The common types of service animals are: guide, hearing, mobility, seizure alert/response dogs, dogs trained to detect explosives and drugs, dogs for search and rescue and so forth. In order to transport the animal, you must first obtain permission from the airline, submit the documentation required and specify the details of carriage.

Today an increasing number of airlines permits the free carriage of Emotional support and psychiatric assist animals in the passenger cabin (usually cats and dogs up to 8 kg), provided that you've got all the necessary documentation from your psychiatrist/psychotherapist. This topic is able to set free some pet owners' imagination, but ask yourself: what is the probability of them allowing me to board a plane with such a certificate? As always in order to transport your animal you'll need to acquire the preliminary agreement with the airline.

Try to use direct flights (it's not always possible, because airlines often impose time limits on flights with animals: for example, the maximum possible duration for flights with pets by Aeromexico is 6 hours). But a direct flight will not only make your journey easier and more enjoyable, but also will allow you to avoid unnecessary costs. Some airlines impose additional fees on flights with intermediate stops lasting more than a few hours for services related to the animal's care during this stop. For example:

Fees for carry-on/in the cabin pets:

Charges for the pet carriage in the cargo area / baggage compartment as checked-in baggage.

It must be said, that there's also a possibility of transporting your pet as cargo, but we will not speak about it (your pet has to be checked in through the cargo terminal, not the passenger terminal, all the rules will be quite different). The below mentioned prices are mostly relevant for with max weight of a container not exceeding 23 kg and less than 158 cm / 62" in three dimensions, unless explicitly stated otherwise.

Maximum weight for carry-on pets / pets transported in the passenger cabin. Maximum weight refers to the weight of an animal/animals together with its/their container + water and food (relevant for transportation in the cargo area of an aircraft).

But do not hurry to blame the airlines for such meager weight allowance. The size of a container with this maximum permissible weight is often limited by 90 cm only, less and less airlines allow the container size of 115 cm, height of the hard carrier is often equals to 20 cm. And airlines imply that an animal should be able to comfortably stand there (wonder how?). So the pleasant exception to the max weight rule by Alitalia is not looking so pleasant (90 cm in three dimensions with max height of 20 cm and max weight of 10 kg).

Keep in mind that the majority of airlines won't allow a passenger carrying a pet into the business or the first class cabin (it's changing now). Some airlines (KLM) will not allow you to reserve seats with any extra legroom or you'll even have to sit in the back row of the passenger cabin:( Exception Vietnam Airlines: they've once put pet carriage as a special offer to business class passengers on some routes (look for PETC:)).

Now to the maximum weight of pets carried as checked baggage. Not a very good idea, if for no other reason than that most airlines, exactly as United Airlines will not be liable for illness or injury to an animal or death of an animal due to illness or injury when the animal has been handled by UA with ordinary standards of safety and care. 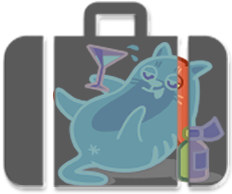 Have a safe flight and enjoy yourself!

(1) If you're not exceeding free baggage allowance.

(2)An advance conditional reservation for a non-refundable fee.

(4) Pet in the cabin: there is an additional $125 service charge for each stopover of more than four hours within the U.S. or more than 24 hours outside of the U.S.

Where and when to look for the best flight deals — Tips & tricks for finding cheap air tickets.
Find flight deals online — Best flight search engines and online travel agencies.
Avoid flight booking scams — or Someone out there always wants to cheat us.

BAGGAGE:
How much luggage can I take, if I'm flying with European Airlines? — European airlines conditions of carriage.